The World Anti-Doping Agency (WADA) announces today that the Agency’s independent Intelligence and Investigations (I&I) team has completed its investigation of 298 Russian athletes that WADA I&I targeted as part of its ongoing ‘Operation LIMS’(1) probe into institutionalized doping in Russia and has provided detailed case packages to a total of 28 Anti-Doping Organizations (ADOs), including 27 International Federations (IFs) and one Major Event Organization.

Since WADA I&I’s successful missions to Russia in January 2019 and April 2019 to retrieve a copy of the Laboratory Information Management System (LIMS), associated raw data and samples from the former Moscow Laboratory, WADA I&I has been compiling evidence packages in respect of individual cases.

As announced on 2 July 2019, from the data, WADA I&I identified a target pool of 298 athletes and has painstakingly built cases for each relevant organization to consider taking forward. The evidence that identified the target group was based on information within the Moscow LIMS database obtained by WADA I&I, evidence from the 2016 WADA-commissioned McLaren Investigation, as well as the retrieved samples.

On 29 and 30 April 2020, WADA I&I held explanatory webinars with the relevant ADOs to explain the content of the case packages that were sent to them beforehand, and to explain how to use them to determine whether to pursue Anti-Doping Rule Violations (ADRVs) against the athletes involved. Having provided these case packages, WADA I&I has now concluded its investigation into the target group.

The evidence available for each package is different, and the relevant organizations will have to decide in each case whether to bring it forward as an ADRV or not. WADA will review and discuss the facts with each ADO. WADA will also review the decisions rendered by the ADOs and appeal, if appropriate, to the Court of Arbitration for Sport (CAS). In addition, WADA has the option under the World Anti-Doping Code (Code), where no decision is rendered in a reasonable timeframe, to bring cases directly to CAS.

Director of WADA I&I Gunter Younger said: “WADA’s investigations team continues to make steady progress on this extremely challenging, long-running and multi-faceted investigation. We have built these case packages based on all available evidence and we will continue to provide assistance and advice to the relevant organizations as they assess whether they will bring them forward as doping cases.

“The fact that we have moved to the results management phase now for the entire target group means we are another step closer to bringing those who cheated to justice. This has always been the objective for us as we continue to do what is best for clean sport and athletes around the world.”

WADA President Witold Bańka said: “This has been the most complex enquiry in anti-doping history and WADA’s investigations team has been doing an outstanding job. It has been a huge undertaking, involving thousands of samples, 24 terabytes of data(2), hundreds of athletes across 28 organizations, and it is delivering real results. The Russian doping crisis has dominated WADA’s time and resources over the past five years and the Agency’s investigations team has been on the frontline. I would like to thank them for their diligence, professionalism and expertise, as well as the organizations that have now received case packages for the work they will do and their ongoing cooperation in protecting clean sport and for bringing as many cheats to justice as possible.

“This is not the end of the road. There is still more reanalysis of the samples retrieved from the former Moscow Laboratory that is ongoing. This reanalysis process, led by WADA, has already uncovered 57 cases that are in the results management phase. This is in addition to dozens of cases that have already been brought and procedures that have been opened by IFs based on evidence uncovered by ‘Operation LIMS’ in weightlifting, biathlon and athletics, as well as other cases in various sports that resulted from the Pound and McLaren investigations commissioned by WADA between 2014 and 2016.”

153 of the 298 cases handed over to the 28 ADOs by WADA I&I are unaffected by the alleged manipulation that resulted in a non-compliance case being brought by WADA against RUSADA, which ultimately resulted in WADA’s Executive Committee supporting on 9 December 2019 a recommendation from the Agency’s independent Compliance Review Committee (CRC) to declare RUSADA non-compliant for a period of four years. That case is now pending before CAS.

As previously reported, the alleged manipulation of the data relates to the files of 145 athletes within the target group of 298, an impact of almost 50%. However, WADA has provided packages for all 298 targeted athletes, even the files of those 145. This will enable the relevant organizations to access and evaluate all available evidence.

The circumstances in relation to the non-compliance case WADA brought against RUSADA for alleged manipulation of some data are well known and will ultimately be decided at CAS. Meanwhile, separate to that case, WADA is continuing to forge ahead using all available evidence in line with the correct process to hold the guilty to account.

As outlined here, under the terms of the World Anti-Doping Code (Code), WADA is not at liberty to divulge the names of the individual sports and organizations that received the evidentiary packages at this stage of the results management process. All relevant information and outcomes of cases will be published in due course once the process is complete, as required under the Code.

Furthermore, the Athletics Integrity Unit (AIU) of World Athletics continues to conduct its own investigations after WADA I&I last year provided it with the LIMS and raw data for all relevant athletes, including those who are part of WADA I&I’s target group. Following that formal handover from WADA I&I, the AIU has taken the lead in building cases and identifying ADRVs, where appropriate.

(1)     As outlined in the following graphic, WADA I&I’s ‘Operation LIMS’ is comprised of three pillars: 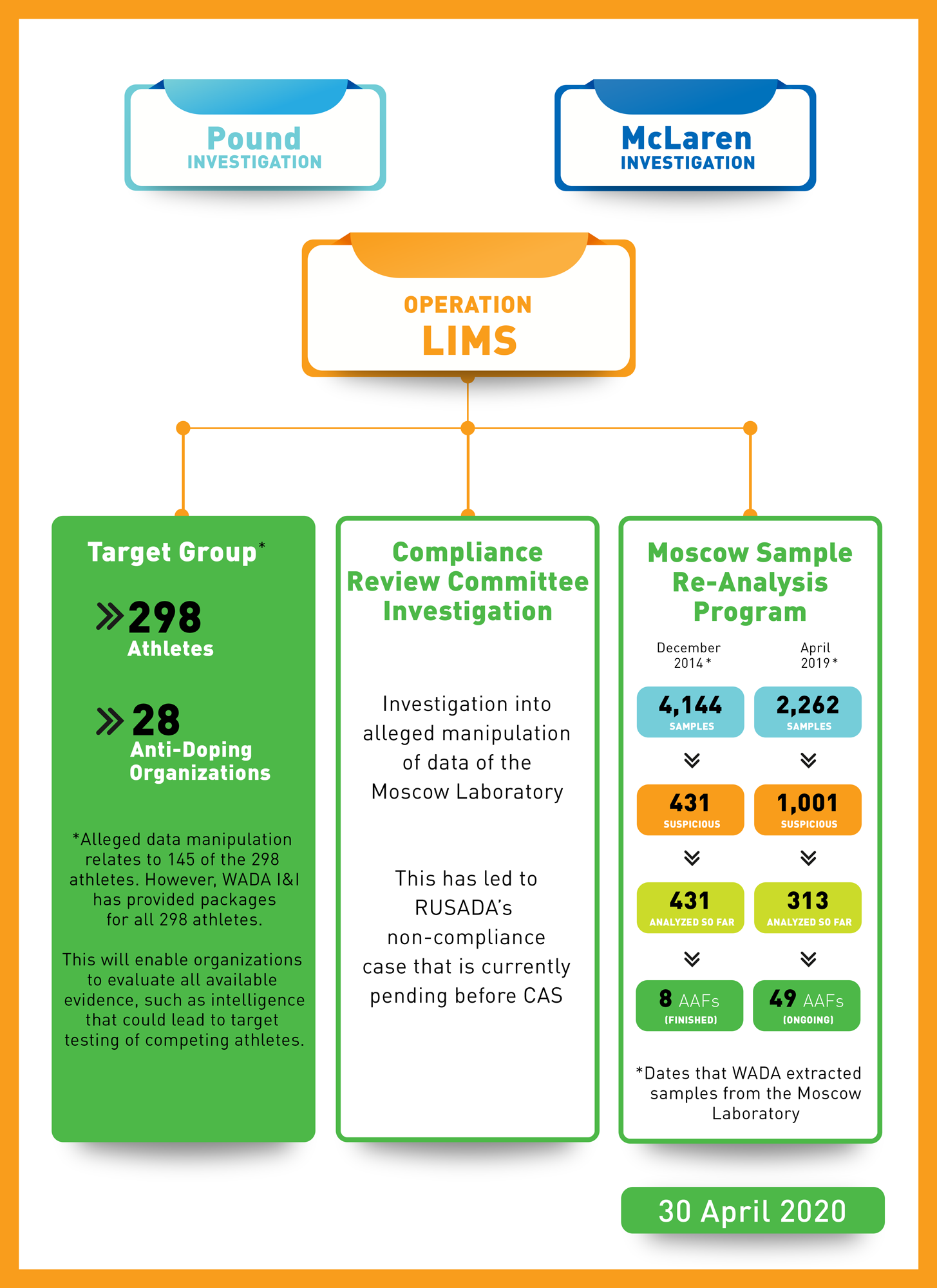