Just over two years have passed since I announced my decision to run for the presidency of the World Anti-Doping Agency (WADA); and, a little over six months since I took up the position. When I entered the race for this position as a former athlete and lifelong sports person, I was ready to face all odds. From the beginning, given the nature of the business, I knew that it would not be a quiet cruise but rather a boat sailing on the stormy sea. The only thing I hoped for, just as every true athlete does, was the opportunity to take up new challenges; to fulfil my mission in a spirit of  honesty and mutual respect with stakeholders; and, for the Agency and I to be assessed fairly.

Today, I am prepared to reflect on the complex landscape in which WADA and I personally are operating. As I still feel and think like an athlete, I would like to share these thoughts with you, my fellow athletes.

WADA was established in 1999 as a unique platform for cooperation between Governments and the Sports Movement, following the failure of actions taken by each of these parties individually. The forces were united to fight doping, the greatest threat to modern sport, more effectively and persistently. For over 20 years, this organization has matured and assumed new responsibilities, setting new standards for the operations of Anti-Doping Organizations worldwide; and, above all – it has tried to meet the increasing expectations of our stakeholders with limited financial means. Of course, mistakes have not been avoided, but only those who do nothing make no mistakes.

Today, WADA covers many areas, from setting the rules and monitoring compliance; education; and, scientific and social science research; to development of anti-doping programs; building anti-doping capacity around the world; and, carrying out investigations. It can rely on a highly professional and extremely committed staff of international experts and many equally qualified volunteers within its governance structure.

I think that this experiment that started in 1999, which probably not everyone believed in at the time, turned out to be successful. Therefore, as the new president of WADA, who has already had the opportunity to get to know the Agency from the inside but remains objective in his opinions, I am dedicated to further developing this experiment. I believe that only in the spirit of collaboration between Governments and the Sports Movement is it possible to combat doping in sport effectively. This unique construction best serves its most important stakeholder, the athletes around the world.

Today, it is difficult for me to imagine WADA without our public authority stakeholders that engage with their law enforcement agencies and support the fight against doping in their respective countries; just as, I cannot imagine the Agency without the Sports Movement stakeholders ensuring that unified rules are applied across all sports and in all competitions. Is it a perfect construction? I will answer in the words of the eminent British politician, Winston Churchill, who once said of democracy that “…No one pretends that it is perfect or all-wise. Indeed, it has been said that it is the worst form of government except for all those other forms that have been tried from time to time.”

Today, WADA is often targeted by political attacks and games. Various arguments are used in these attacks -- ranging from how our activities are financed and who can legitimately represent stakeholder interests to allegations of a lack of transparency. I can assure you that I will not allow WADA to get bogged down in these political games; and that, control of WADA is not for sale, no matter what stakeholder we are dealing with.

Some critics of WADA allege a lack of transparency. However, I have the impression that the loudest criticism comes from those who, unfortunately, are not known for being particularly transparent themselves. WADA’s Foundation Board (Board) meetings are open to the media; and, in the future, I want them to be streamed online. Today, on WADA’s website, one can find the Agency’s statutes; the verbatim minutes of WADA’s Board and Executive Committee (ExCo); annual reports; a full list of our annual contributions from governments; our Five-Year Strategic Plan; information on WADA’s governance along with its members/representatives; media releases; and, a wide array of other communications. Every year, WADA responds to thousands of external inquiries from the media, athletes and the general public. Isn't this transparency?

Could we do more? Of course. However, we also have some limitations. For example, we cannot publish information about pending investigations in order to protect the integrity of the work conducted, as is normal practice in law enforcement, or about developing compliance cases with the World Anti-Doping Code in order to comply with the rules and processes of International Standards. However, I promise you that this information is progressively being made public as soon as it becomes possible without compromising outcomes. This also applies to the Russian Anti-Doping Agency (RUSADA) case, which is currently being reviewed by the Court of Arbitration for Sport (CAS) and for which we asked for a public hearing.

I would expect similar transparency from our critics. For them to be transparent. To publish their governing documents. To tell the world who finances them and who their members are. I am sure that the athlete community would also like to know.

You may think that this letter is a response to criticism. It is not. Criticism is normal to public life; and no organization, especially one as important as WADA, can avoid it. I can assure you that I am not afraid of criticism because every difficult decision gives rise to it and yet, I continue to make such decisions. I do however believe that criticism should be honest and constructive. This is what my sports career has taught me. Constructive criticism can help an athlete to motivate himself or herself and improve his or her performance. Therefore, I can assure you that WADA and I personally take honest criticism very seriously. We value all stakeholder input and feedback; in particular, from you, the athletes.

WADA is an organization that is constantly changing thanks to fruitful collaboration with its stakeholders. In November 2018, WADA’s Board approved governance reforms. As a result, a Nominations Committee was formed to ensure the right people in terms of skills and independence serve in senior governance roles within WADA. A term limit was also introduced for members of the Board, ExCo and all five of our Standing Committees. Only persons who meet the independence criteria may currently apply for the positions of President and Vice President of WADA. As part of the reform, the ExCo will soon be expanded to include two independent members. Moreover, a minimum of one seat for athlete representation has been guaranteed in all Standing Committees; and, one seat for National Anti-Doping Organizations in all Standing Committees except the Athlete Committee and the Compliance Review Committee.

WADA’s Athlete Committee is working on a concept to develop an ombudsperson’s office, which I personally support strongly. Its members are also working on transforming the Committee from an advisory body to a representative body, with the view to a representative of the Committee being appointed to WADA’s ExCo. Already, however, the athletes and former athletes who sit on the most important bodies of WADA, on the ExCo and the Board, constitute over one third of the composition. And this is not the end of the governance reforms.

Meanwhile, I have also read public comments pointing out that we lack “independent” athletes within the governance structure. But what does it mean to “be an independent athlete”? What makes one organization dependent and another independent when both are financed and therefore are dependent on someone? Why are some athletes considered to be better, more worthy, representatives of the athlete community than others? Who wants to create division within our community and for what purpose?

I would like to know the answers to these questions. As a former athlete who has completely resigned from all government functions previously held; and, who has never belonged to a governing body of any sports federation, I consider myself an independent athlete. Moreover, as a person who lost litres of sweat on an athletics track, then served sports in my country as a minister, I always carried the ideals of fair sportsmanship at heart; and therefore, I consider myself a worthy representative of the athlete community at WADA. I also believe that all my colleagues on the ExCo and the Board; who have represented their countries in different sports arenas around the world -- sometimes with much more success than I -- have the right to consider themselves athlete representatives. And no one, no critic, can take that right away from them. There are no better and worse athletes, more and less worthy to represent us as athlete representatives within WADA.

When I look at the long way that WADA has come over the past two decades, it saddens me that there is a lot of politics at play; battles for positions and influence around the activities of this organization; and, far too little thinking about the values at the core of the Agency’s mission. WADA was created to ensure that all athletes could participate on an equal footing, under fair conditions, without doping, and respecting each other. Today, political disputes obscure this goal.

However, I remember what brought me to WADA, the mission that I wanted and still want to pursue. I firmly believe that we need to put more efforts into further strengthening the global anti-doping system. I do not want athletes to compete with others who are not subject to robust doping control programs just because their countries do not have the resources to put such programs in place. I am talking to many ministers to increase their contribution to the fight against doping in sport, including financial. I have established the Anti-Doping Solidarity Fund, which is intended to raise private funds to strengthen anti-doping capacity in the regions that need such assistance. Soon, WADA will begin its first partnership program with private companies in the field of education. And this is only the beginning. I promise you that I will continue this mission because I believe this is the true purpose of WADA, because I came to WADA not to play political games but to serve you, my fellow athletes.

Concluding my letter, I would like to invite everyone to work hand in hand with me to advance our common mission. For several months now I have been engaging with athletes individually, including via social media; have been holding virtual meetings with athlete committees and groups; and, going forward, have many similar meetings planned. I am doing this because I strongly believe that WADA exists for athletes; that we need you on board; and, that we are accountable to you in carrying out our mission. 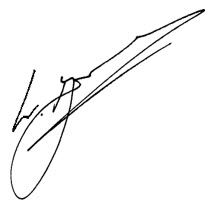